Join our email list and be the first to know about our exciting sales, the best in electronics, gadgets and more. 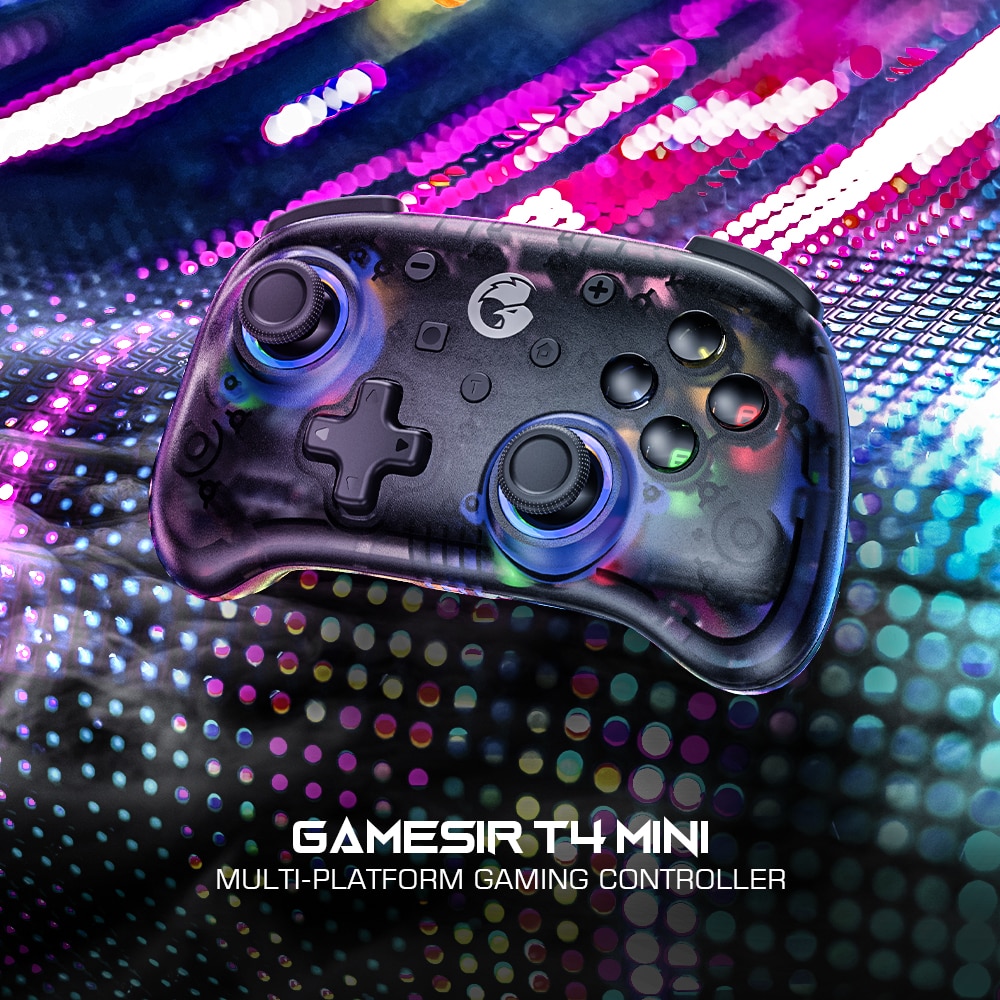 Smaller hands is also an important part of gaming community; however, most standard controllers in the market are more suitable for medium-sized or bigger hands. To make smaller hands use controllers at more ease and play big, GameSir T4 Mini is shaped in a compact and lightweight body. Despite this, it has big cross-platform compatibility, enabling you to have more fun on Switch, Android, iOS phones & PC. In particular, it’s a perfect fit for Switch in multiplayer gaming. Not only it provides authenticity in gaming with built-in 6-Axis gyro and asymmetric dual motors, but also transfers family connection to real lives during family gaming. If you’re looking for a small but mighty controller, T4 Mini can be your best companion. 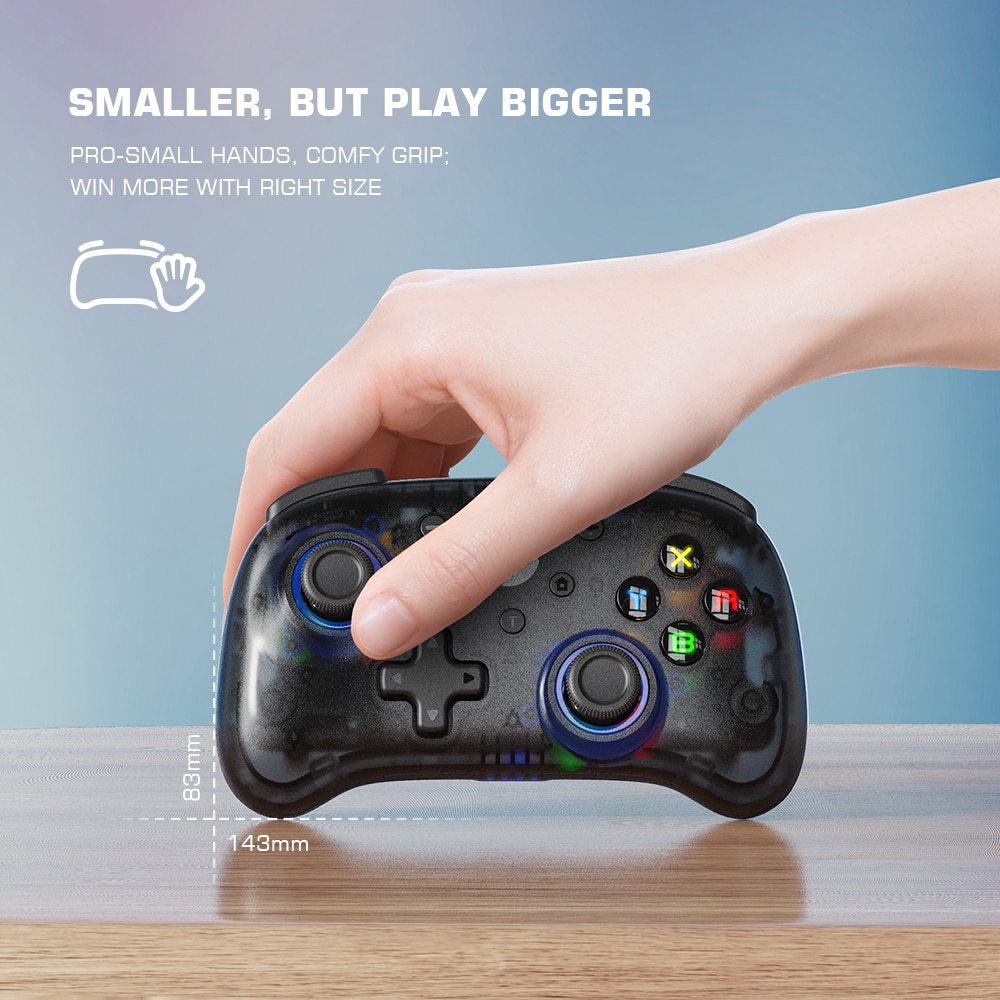 Too much contorting travel for your fingers between the buttons? Lack of grip? Too bulky especially in long-time sessions? Then it’s time for you to reconsider the gamepad size and get rid of those in-game discomfort and pain by using T4 Mini. T4 Mini’s tiny size (L 5.63''×W 3.27'') allows smaller hands to hold the controller more comfortably with less fatigue. Thus, they are able to play bigger as bigger hands with the right size. What’s more, the accessibility of the mini controller makes it easier for the whole family to play together at home or take on the go. 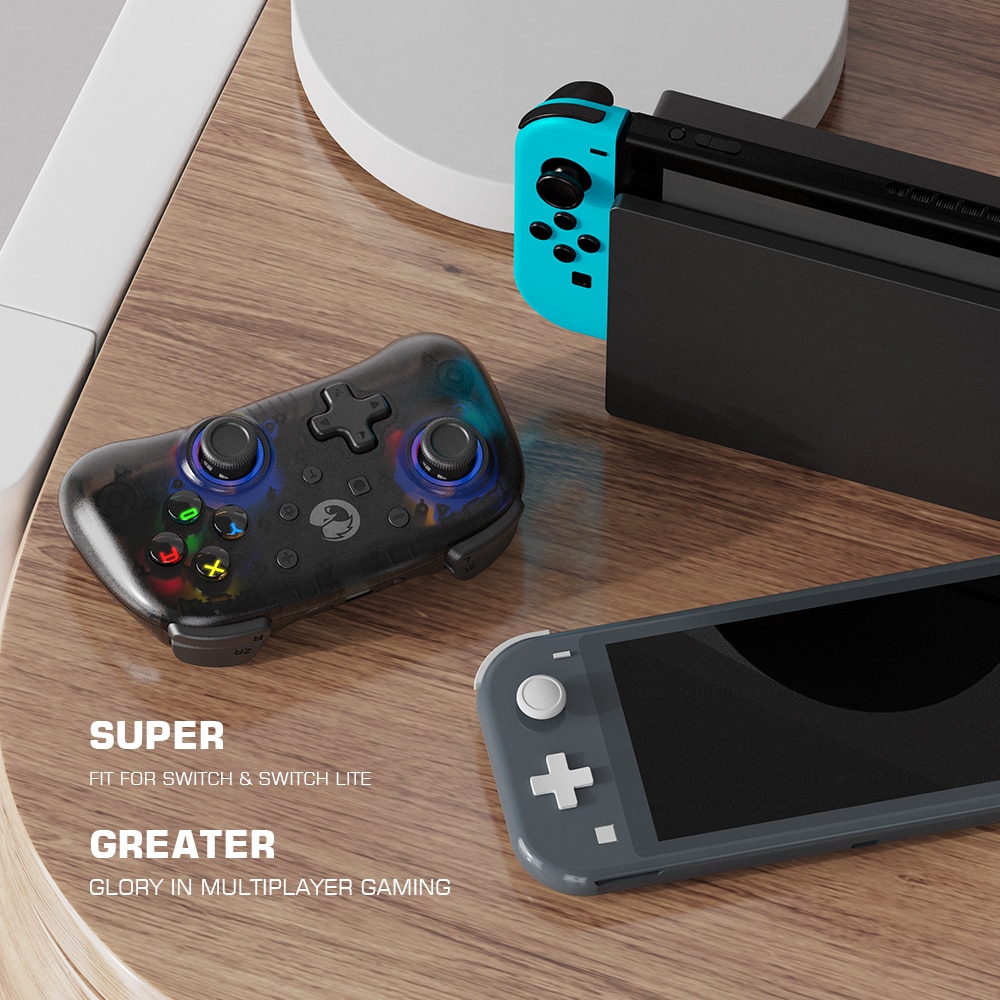 T4 Mini will go to auto-sleep mode after Switch console screen off, thus preserving battery life at more ease without a manual trigger. Meanwhile, one key to wake up Switch console makes you pick up Switch anytime in a hassle-free way, even if you just want a quick-to-start round for a refresh after a long workday or something else. 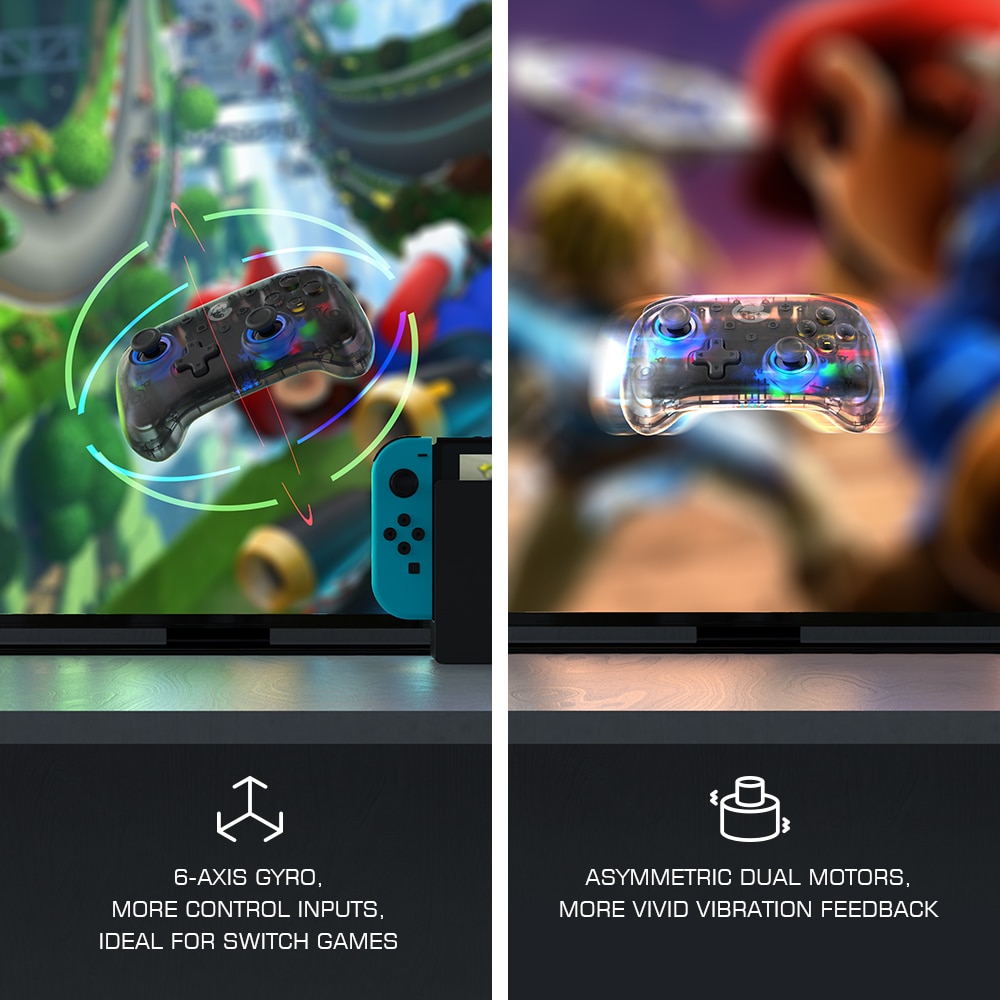 A. T4 Mini is endowed with 6-Axis gyro so that gamers can achieve or combine more motion inputs such as tilt and rotation, enabling more active and immersive interactions in Switch motion control games. B. Asymmetric dual motors create different and non-monotonous vibration effects on the left and right grips, thus delivering a timely, combined, vivid vibration feedback, especially in racing, fighting and shooting games. 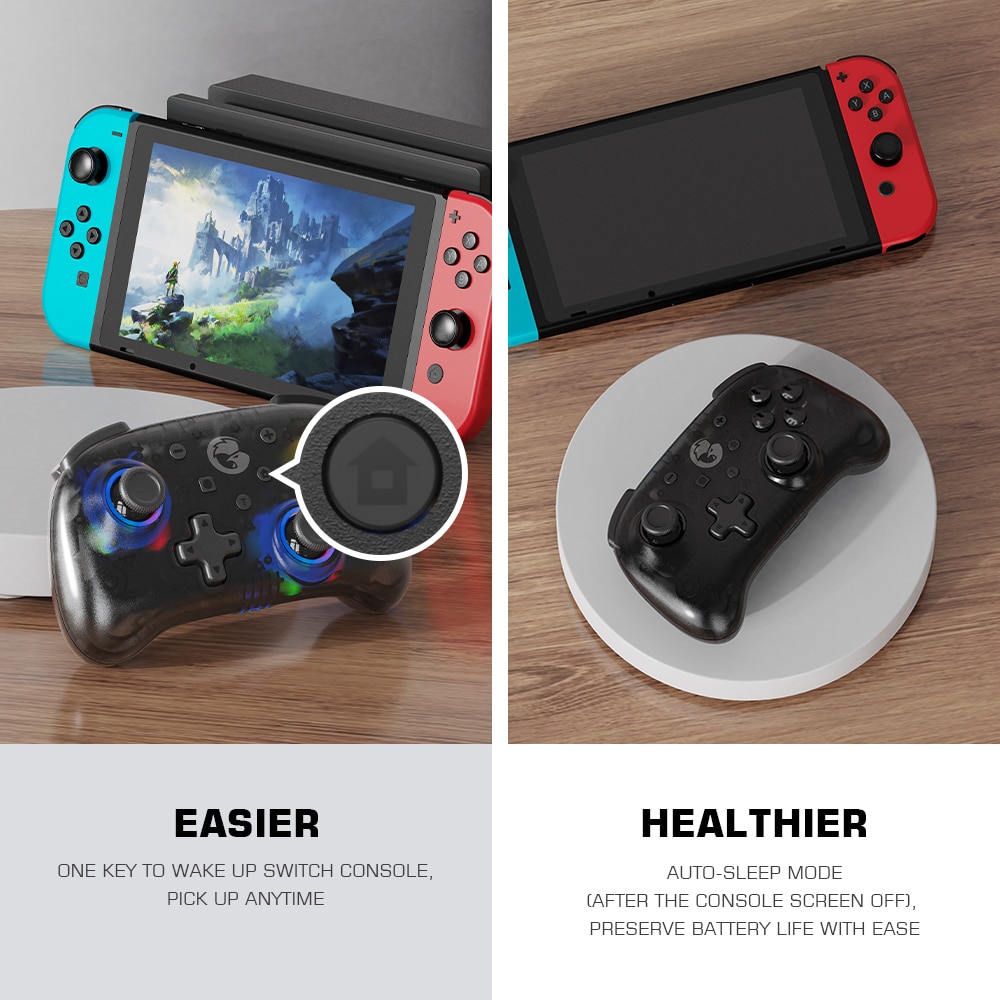 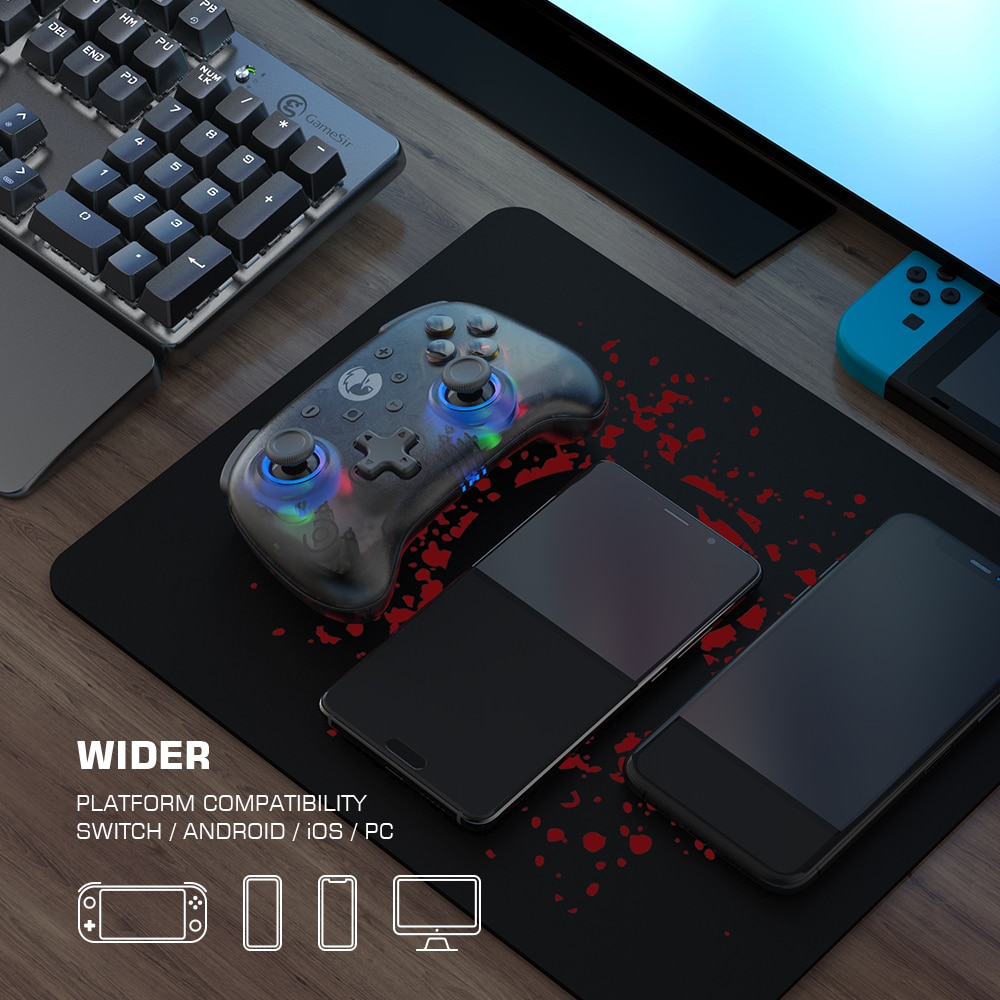 As mentioned at the beginning, T4 Mini is a great fit for Switch. But it doesn’t just end there. It also has wide compatibility with Android, iOS phones and PC, with which you can easily switch between different platforms and have more fun, free from hassle of changing controllers interchangeably. 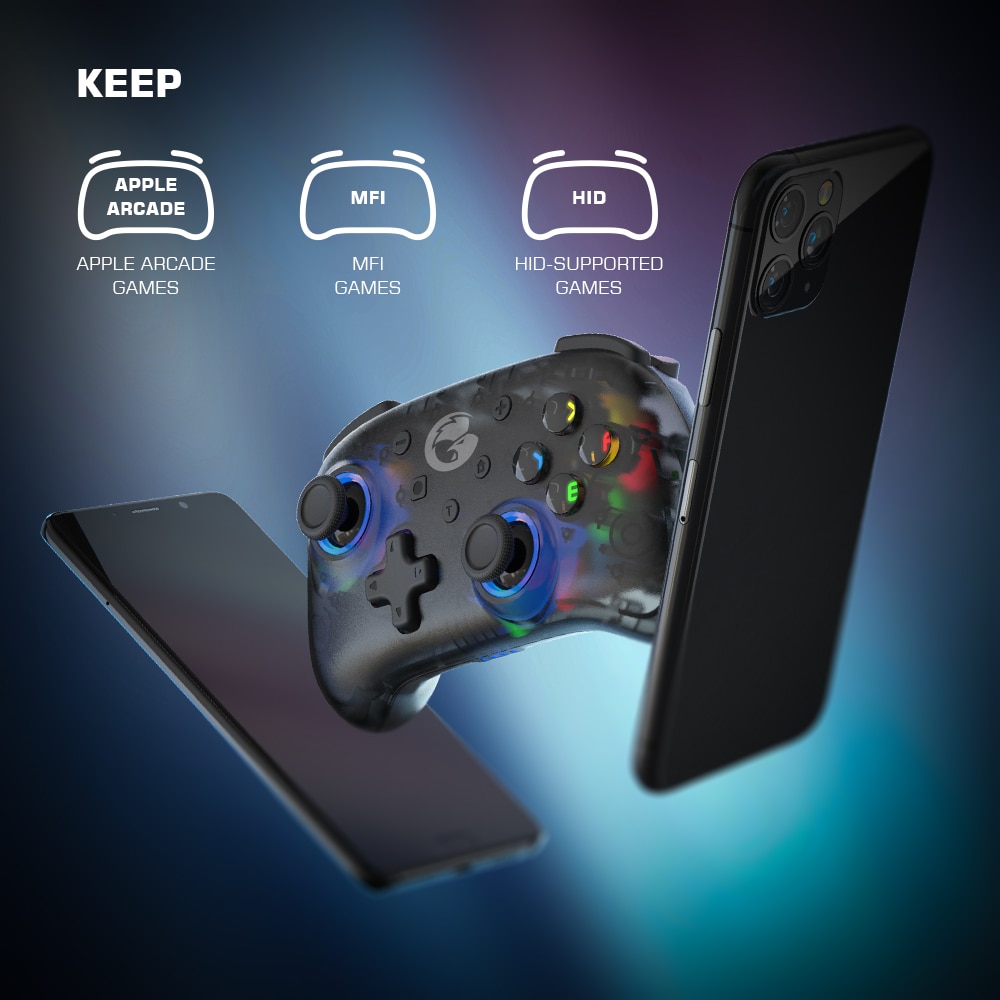 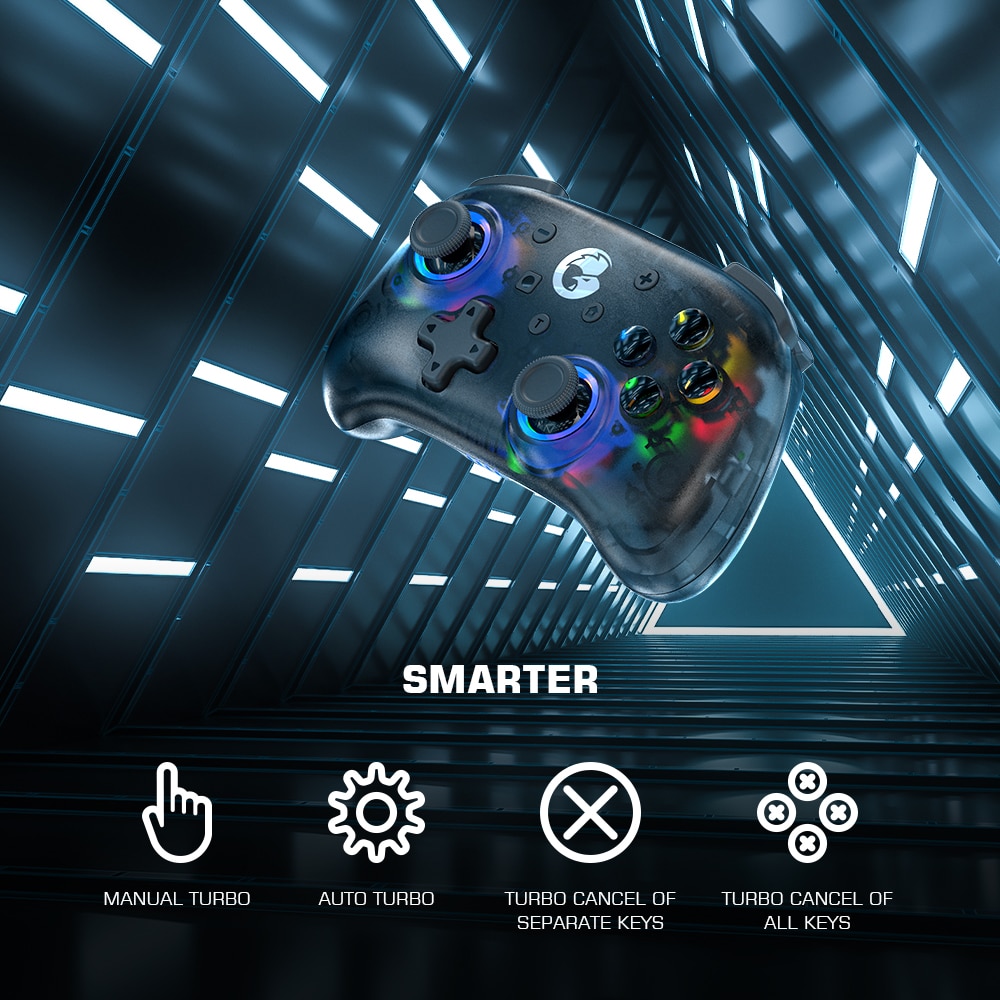 Turbo setup can execute fire actions rapidly, without giving hard hits on the buttons continuously, relieving your fingers’ fatigue while protecting your gamepad at the same time. T4 Mini is equipped with multiple flexible Turbo setups that allow you to maximize Turbo customization. On T4 Mini, you can set up manual Turbo, auto Turbo, Turbo cancel of single key and Turbo cancel of all keys. Thus, different gamers can fulfill different gaming strategies in different games to reach an ultimate gaming experience. 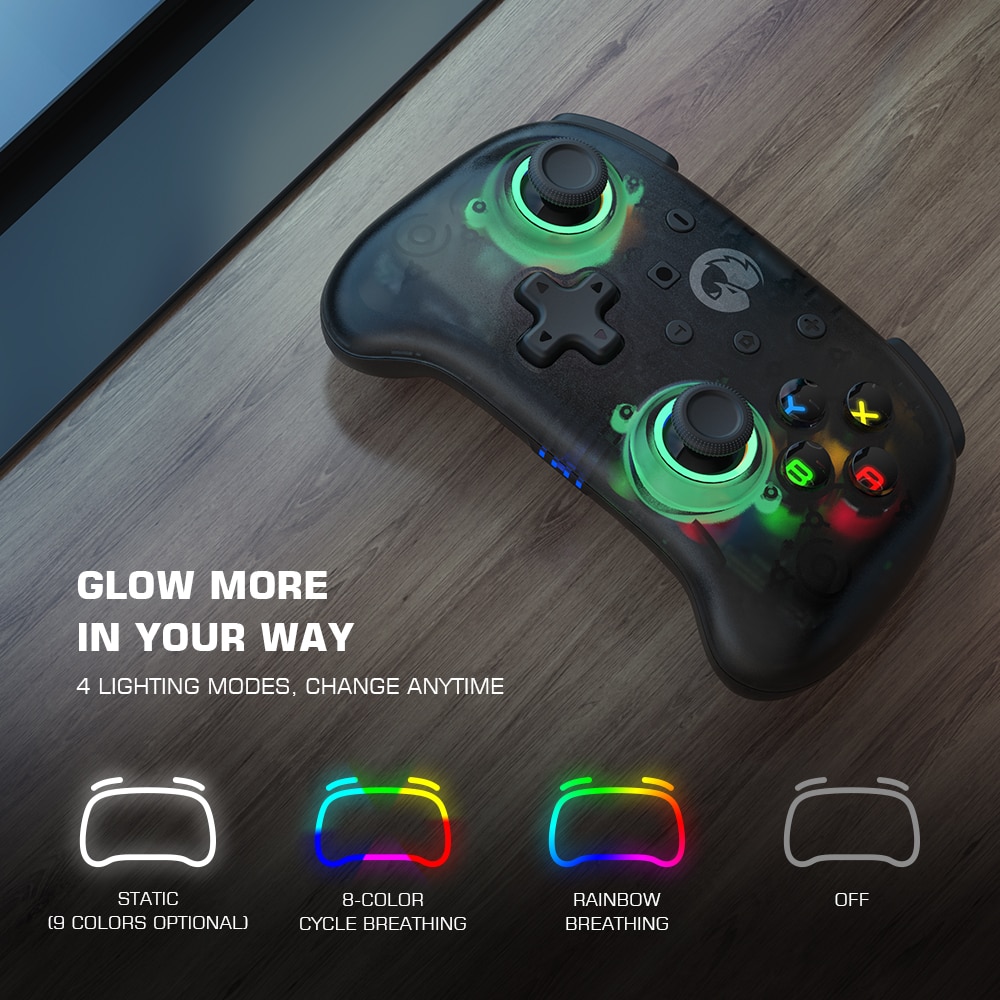 Adjustable backlight modes, glow more in your own way

4 types of backlight on joysticks enables your gamepad to glow as preferred, or not glow. Customization of backlight color and mode can also create different gaming atmosphere in different scenarios, be they tense or relaxing, making you more immersed in the gaming world.There’s one saying in Flipped, “But every once in a while you find someone who’s iridescent, and when you do, nothing will ever compare.” Here on T4 Mini, you can also find the Rainbow in 3 ways (Static / Cycle / Breathe). May this bring good luck to your gaming. A. Static (9 colors optional, blue, red, green, yellow, cyan, orange, purple, pink, and rainbow color)B. 8-color cycle breathing C. Rainbow breathingD. Off 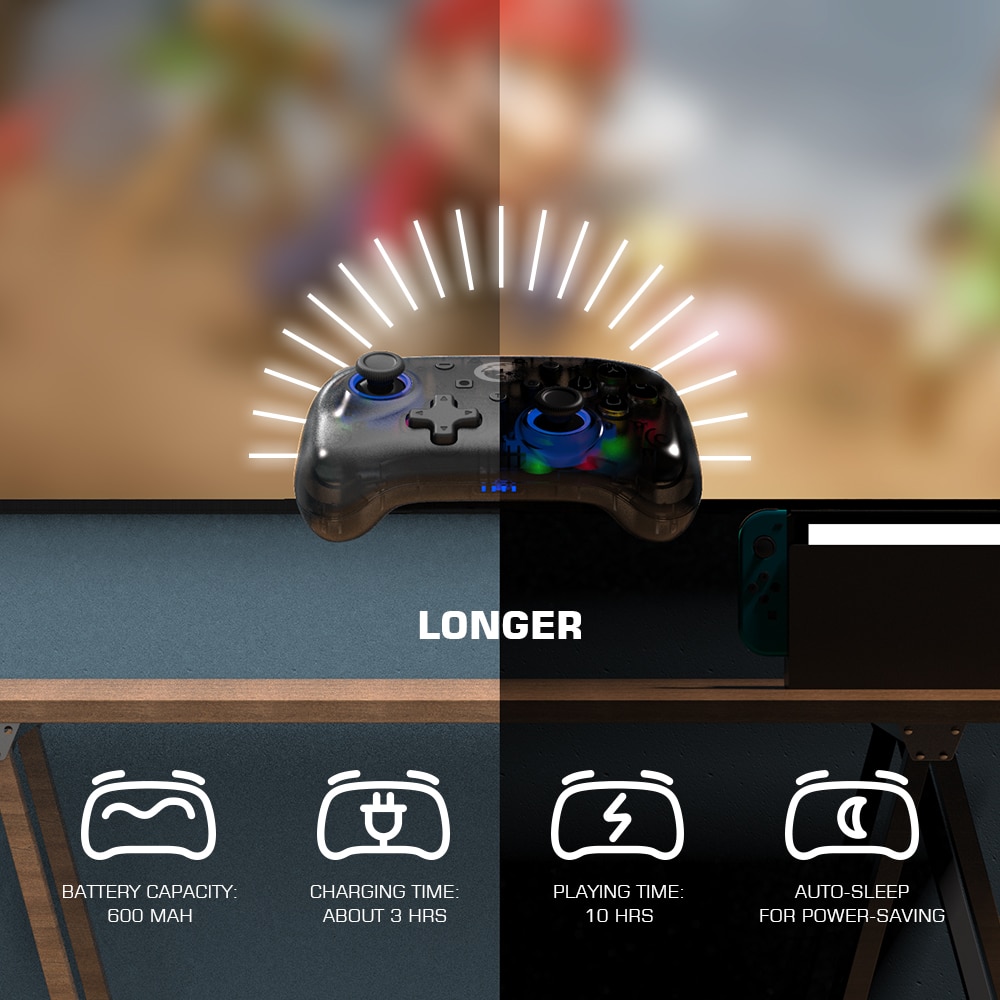 It takes approximately 3 hrs for T4 Mini to reach a full charge. Built-in 600 mAh battery enables you to keep gaming around 10 hrs after fully charged. Plus, the power-saving design of auto-sleep mode secures battery energy and longer gaming fun. 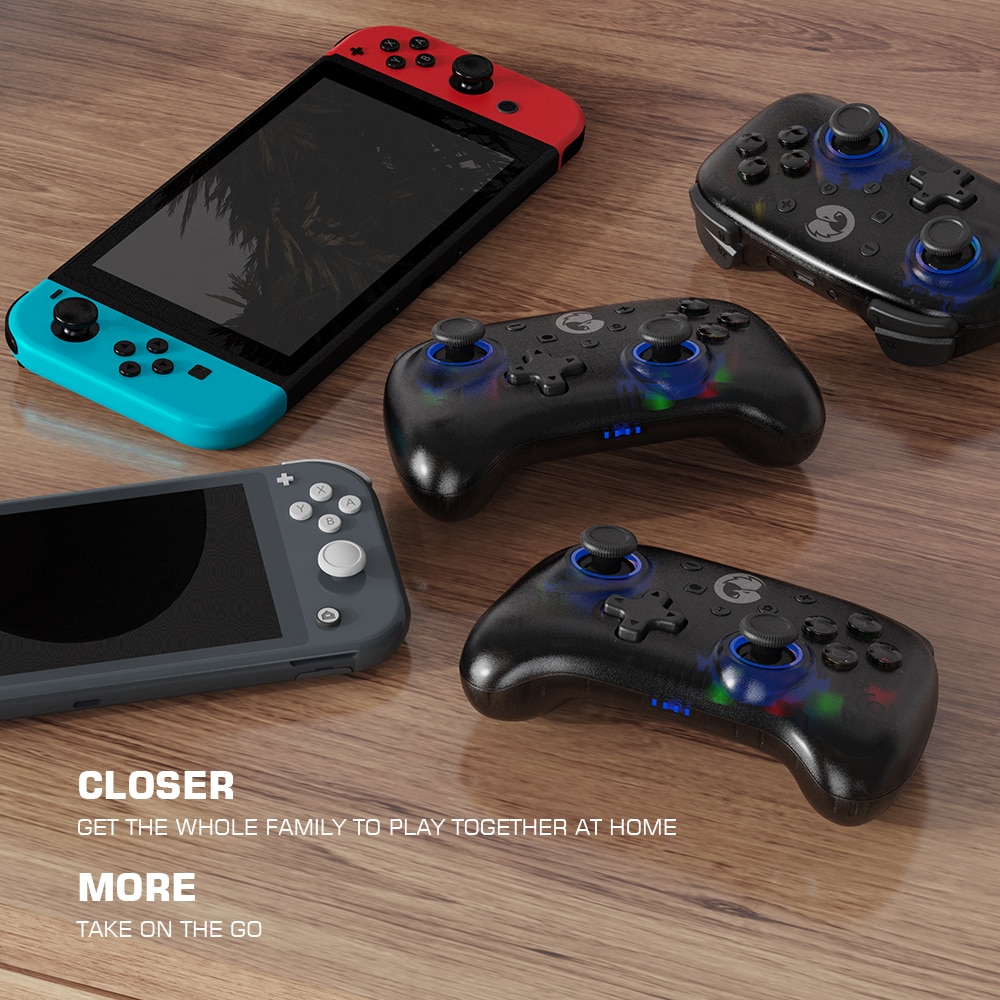 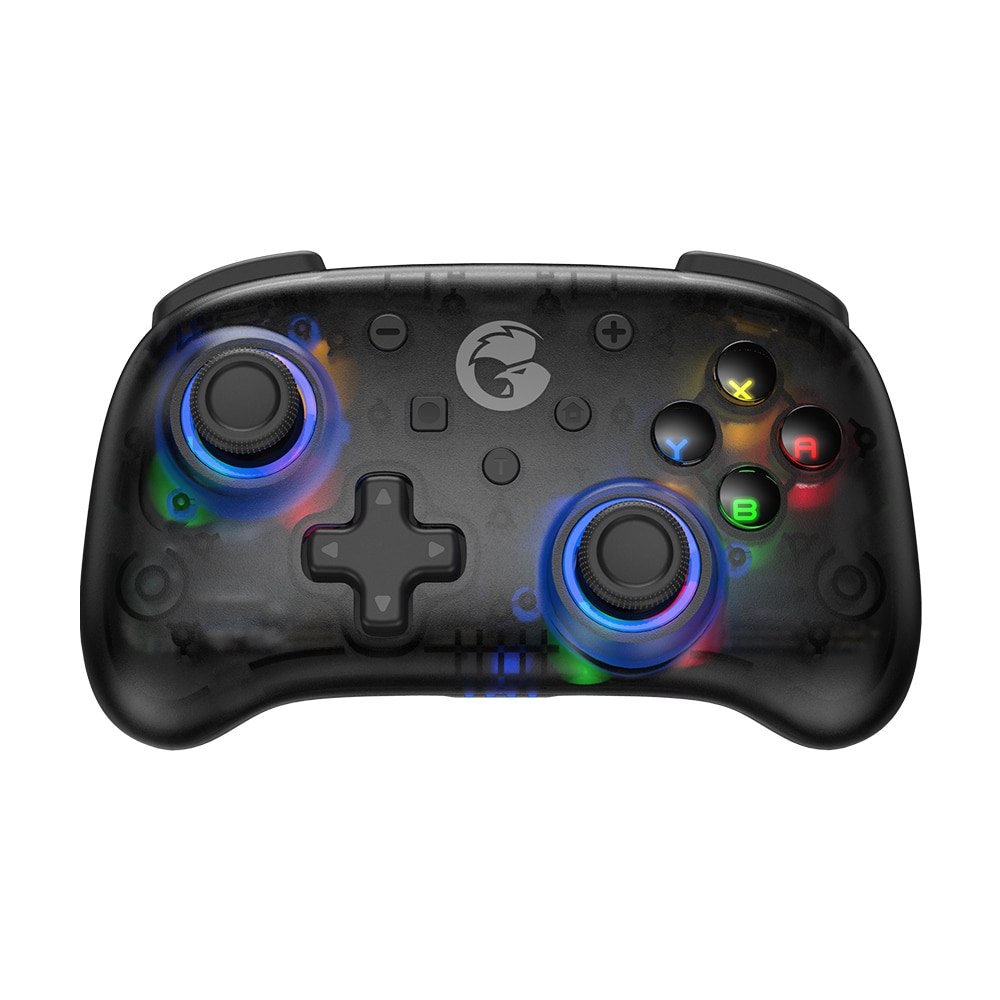 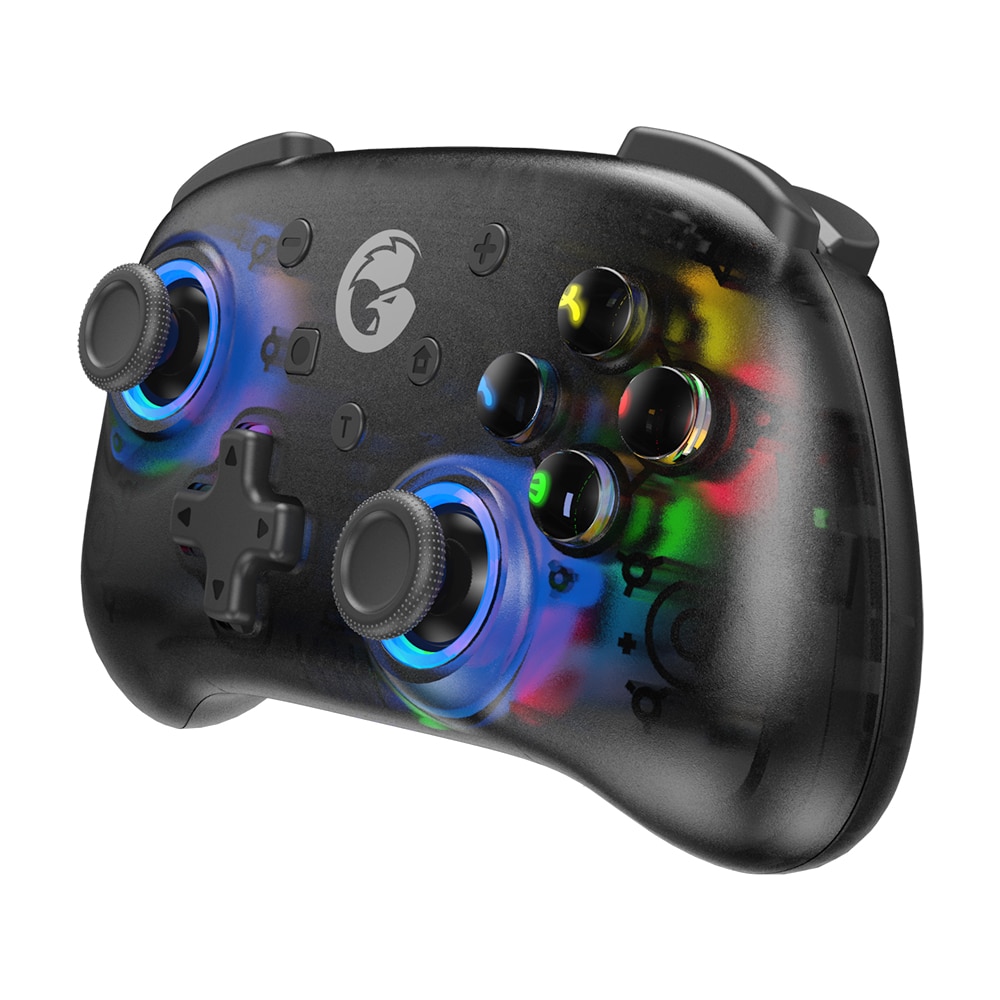 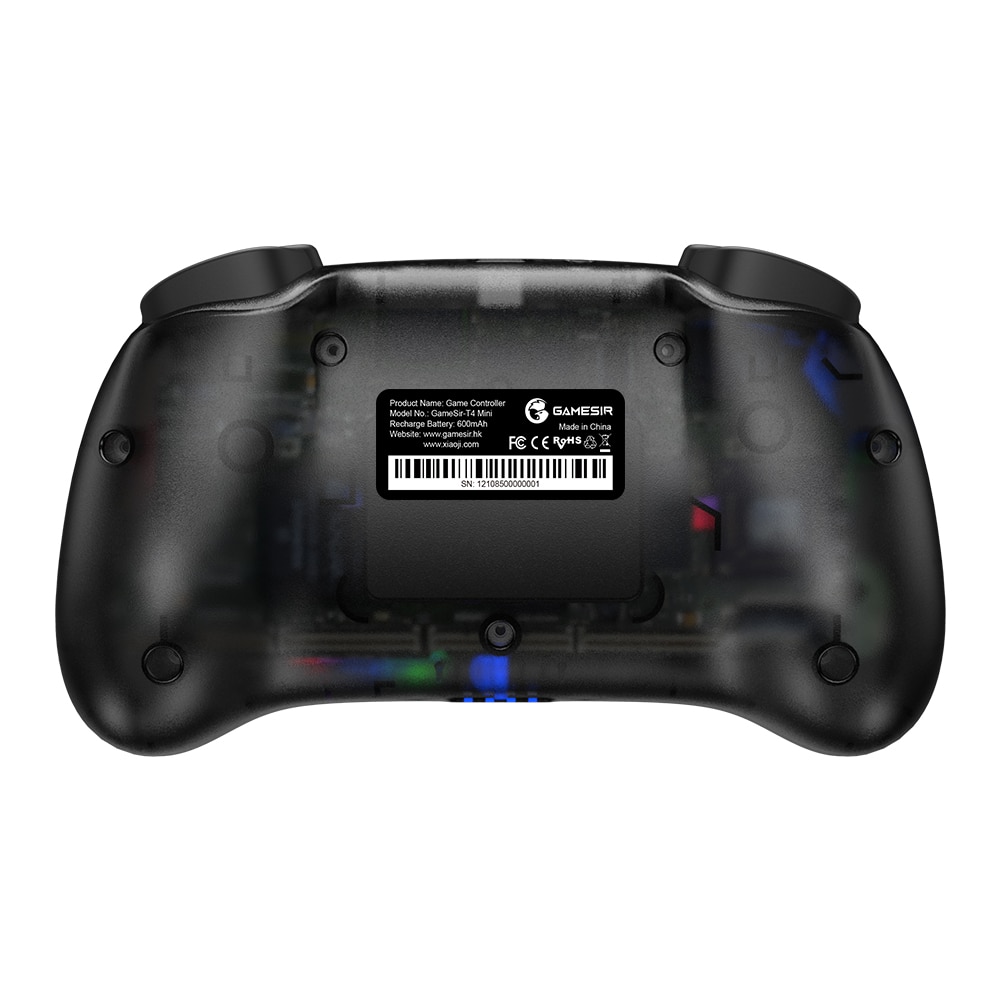 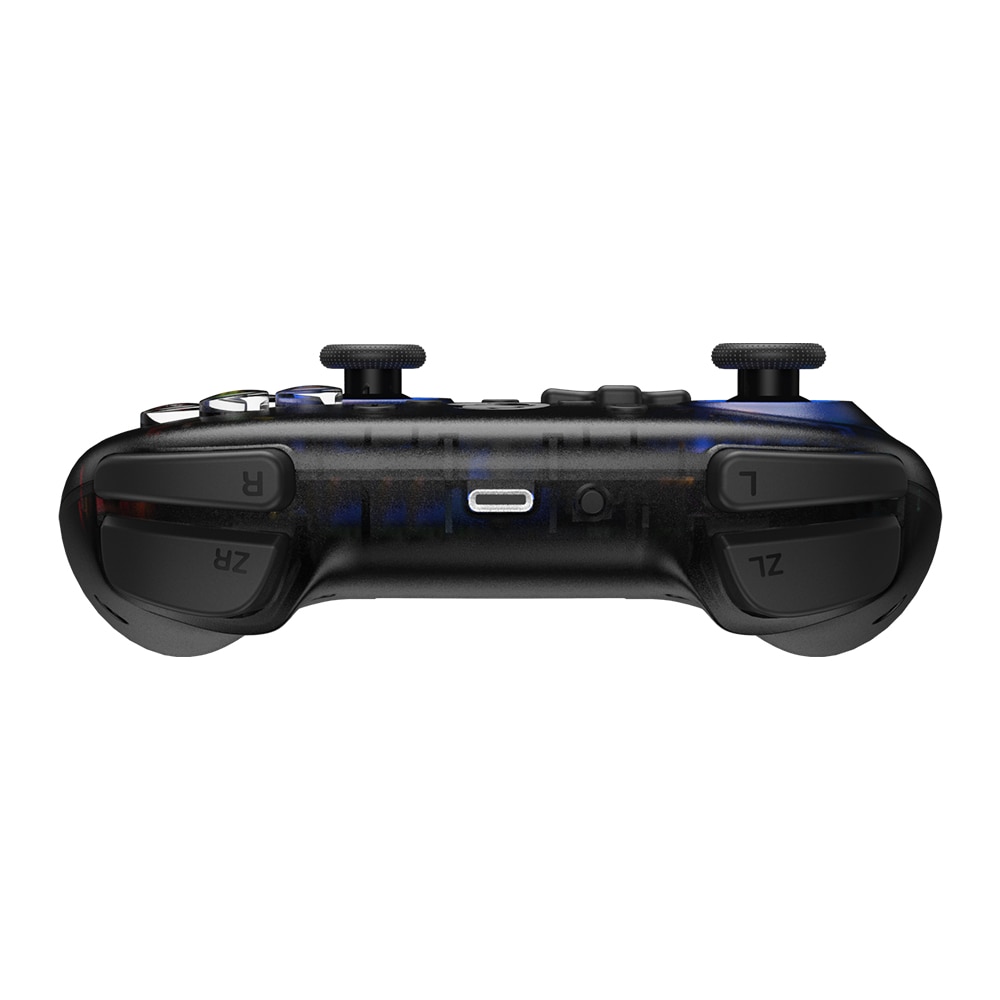 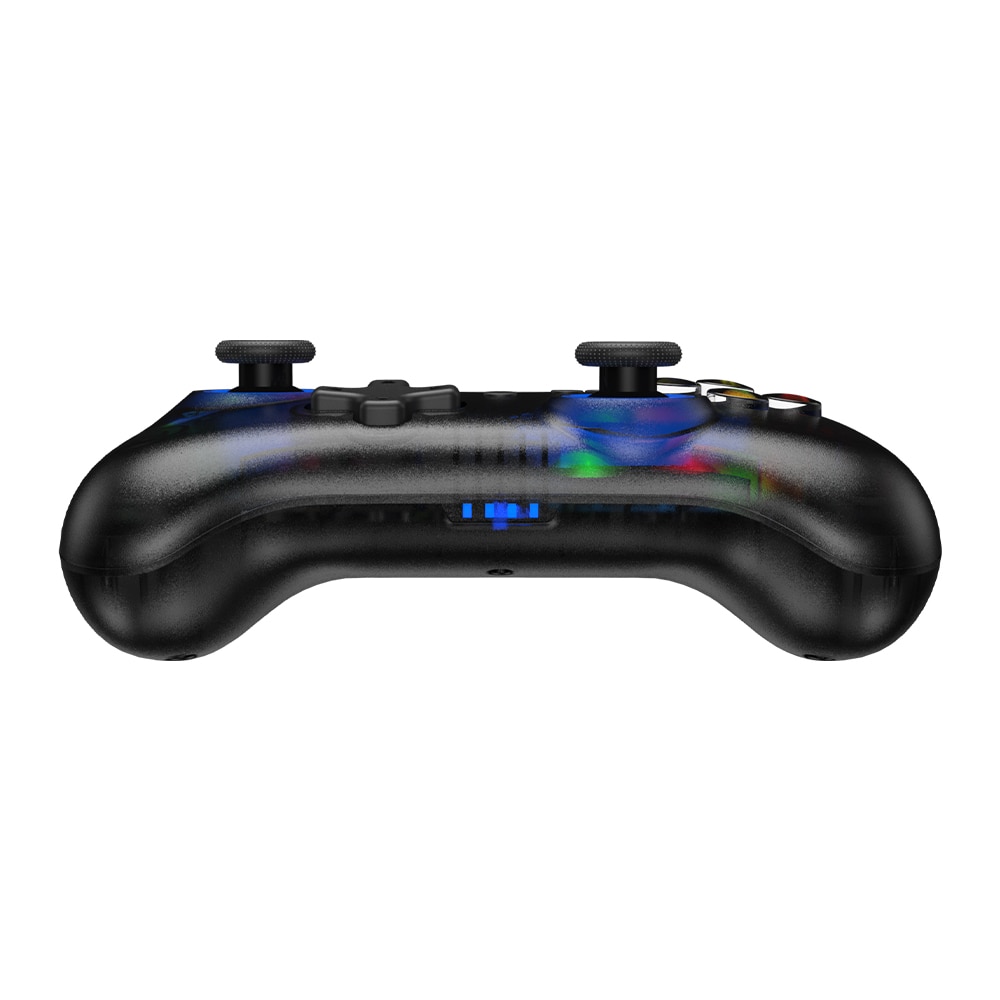 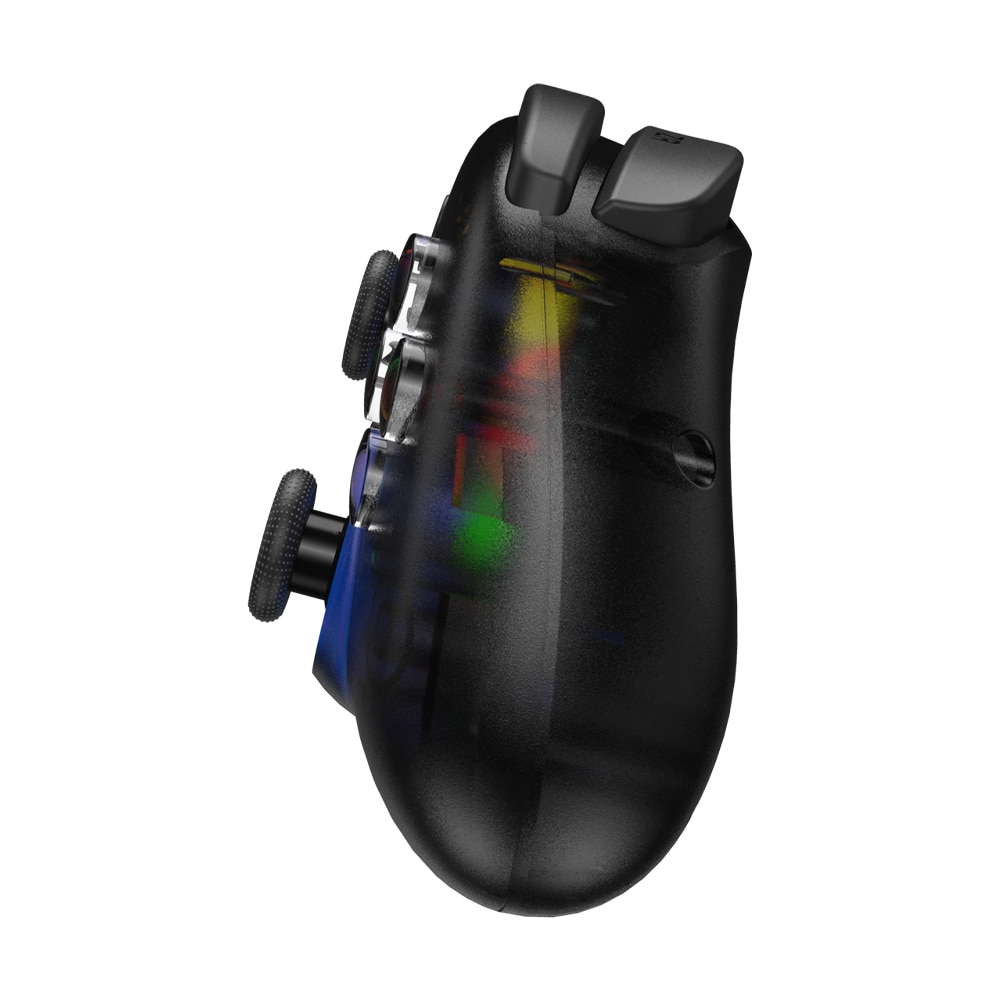 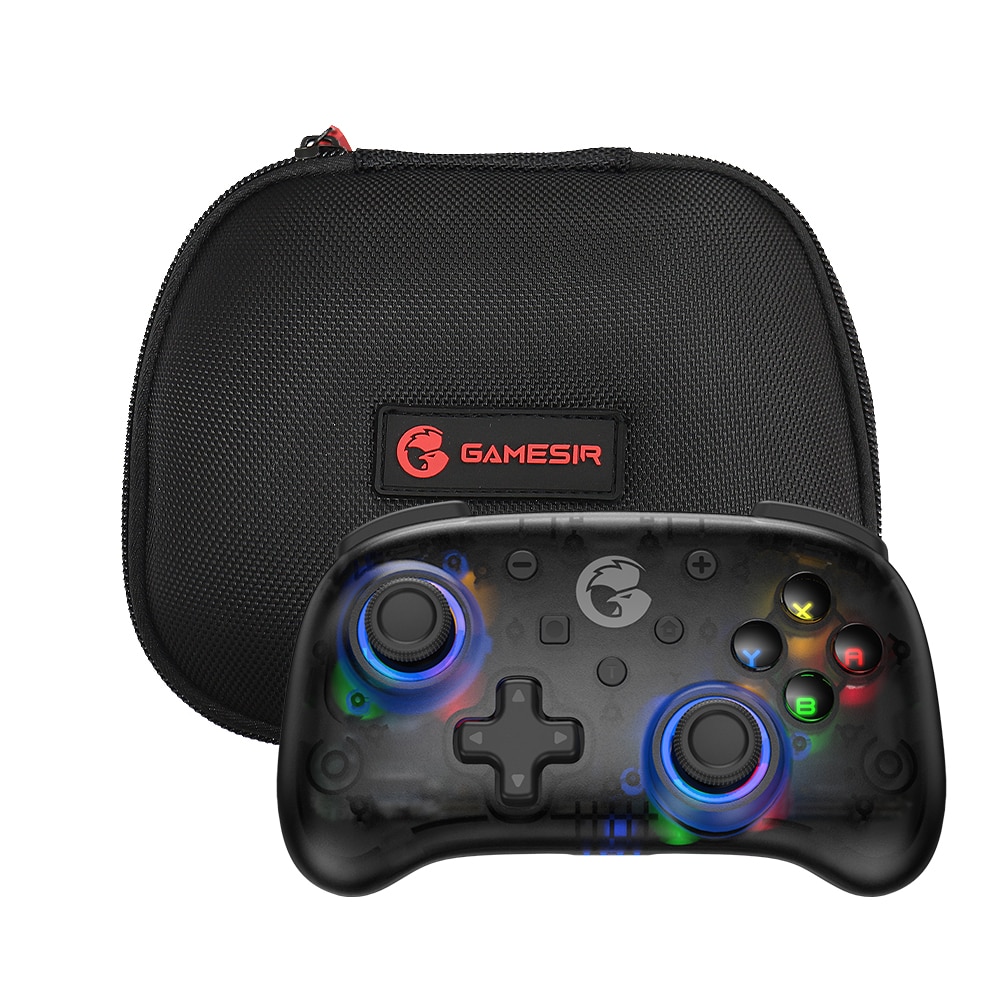